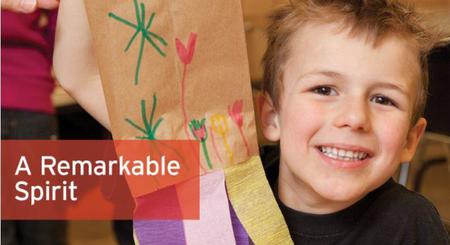 Denise Williams can point to the single story that shows her the remarkable spirit of the Boys and Girls Clubs of Kawartha Lakes.

Before her own three boys got involved in the Clubs seven years ago, Williams was office coordinator at a local school where a Boys and Girls Clubs bus brought kids in every day. One morning, a little girl left her mittens on the bus. Just before recess, the driver showed up in the school office, holding the mitts. He’d rushed back so the girl could enjoy recess without getting cold hands.

“It’s the personal touch,” she says. “They know each child.”

It’s much more than mitts, of course. The Kawartha Lakes Clubs run programs for before and after school, plus a daycare, summer program, and a program for times during the school year when teachers aren’t there, such as professional development days.

Among the dizzying list of programs and services: one to help coach kids to set and reach goals, one to foster leadership skills, one-on-one sessions to solve problems, gymnastic and sports programs, a fully functioning kitchen, a retired school teacher to help with homework after school, and even an outreach program to take the Clubs on the road in the vast Kawartha Lakes catchment area.

“They fill all the gaps,” Williams says. “And they’re continually trying to improve.”

She says the level of staff expertise and commitment is astounding. More than that, staff know everyone who walks into the building.

“They enjoy and love where they are,” she says. “They sure have a model that business could learn from.”

It translates into an indispensible help to the community, she says.

“I’m a huge fan,” Williams says. “I don’t know how parents in our community could function without the Clubs.”

Not only are there the more traditional offerings, but if a child is struggling at school, the Clubs staff will also attend school meetings with parents or on their behalf to help sort things out, Williams says.

“They’re all about solutions,” she says.

And flexibility. A case in point is that each of Williams’s three sons, Keifer, Colton and Mitchell, has benefited immensely from the Clubs, although each has had different needs, she says.

Keifer, 15 (in April), was the first in the family to go to the after school program. A natural leader, he was drawn to the programs that helped him become even more effective in that area. Colton, 12, (in January) is the athlete and the Clubs helped him hone his skills. As well staff introduced him to university students who were interested in the type of competition he’s keen on. Colton still spends his summers in the day camp.

Mitchell, 10, (in March) goes to the after-school program and summer day camp. He’s a free spirit, his mom says, and has faced a few problems. None of it fazed the Clubs staff. In fact, recently his leader suggested that Mitchell enroll in the leadership program because he’s showing signs of being terrific at that.

“They find skills and abilities no one else would,” she says. “They look for the best in you.”